The More Fragmented the Better?—The Impact of Armed Forces Structure on Defection during Nonviolent Popular Uprisings 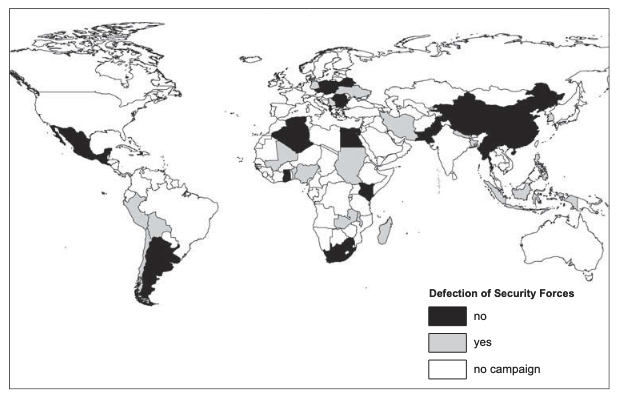 Authoritarian regimes frequently employ fragmentation to safeguard themselves against coups and reduce the power of the military apparatus. This article investigates the impact of structural coup-proofing in the setting of a nonviolent popular uprising that threatens the regime and its survival. It is argued that in such settings fragmentation can have unintentional consequences with respect to the question whether the army fulfills orders of repression or defects. If the security apparatus is highly divided, some armed organizations will seize the opportunity to defect and side with the protesters because the efficiency of counterbalancing decreases if more effective armed organizations are involved. This can be mainly explained through collective action problems that the security apparatus faces in such a setting. This article compiles data of nonviolent uprisings from 1975 to 2006 and data on armed forces structure for conducting a multivariate probit regression on the probability of defection. The findings indeed show a U-shaped relationship between armed forces fragmentation and the likelihood of defection during nonviolent mass uprisings. While security apparatuses with around two effective armed organizations display only a low probability of defection, minimally and highly fragmented forces indicate higher chances of defection from the ruling regime.